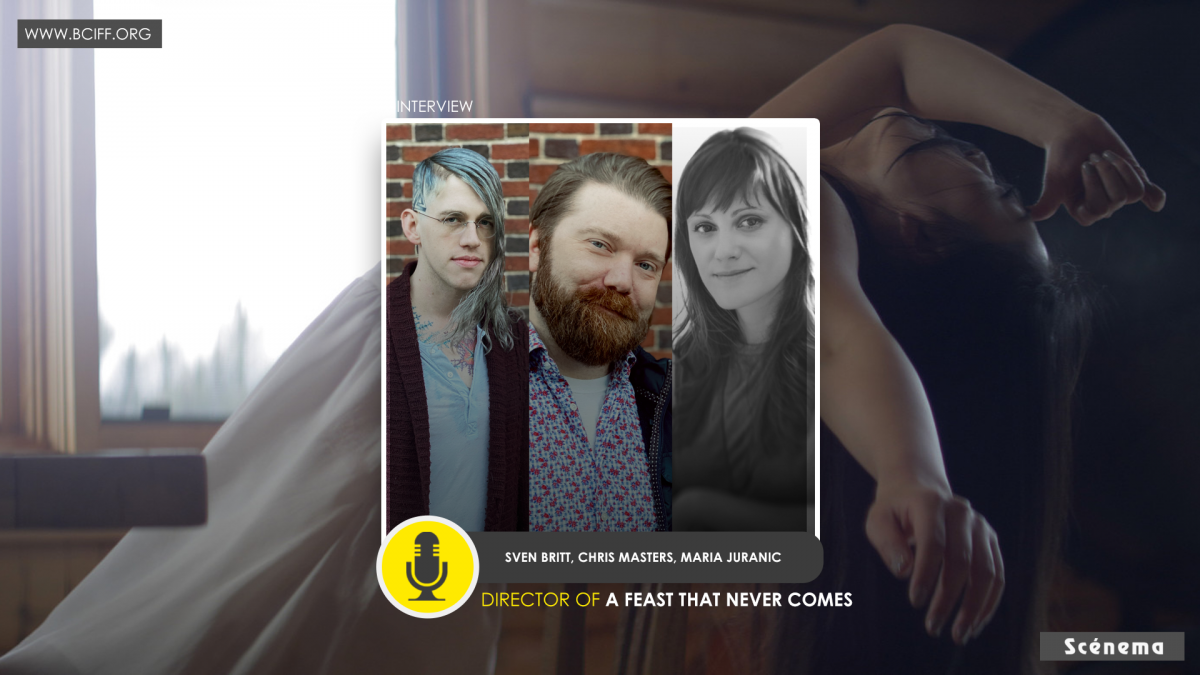 Movie: A Feast That Never Comes

Hello Sven and Chris, welcome to Scénema! Firstly, congratulations for winning Best Music Video and Best Dance Film! And, secondly, welcome! It’s great to have you here. Tell us something about yourselves!

Sven Britt (Writer/Composer/Producer): What an opening question! Hmm. One time I almost got sued by Billy Corgan. For a dance show in Beijing, I once made 24 hours of music in 36 hours. But fun facts aside: I’m a composer whose dedication to craft and intentionality frequently hamstrings my ability to sustain a prolific enough output of work to maintain public focus in the way that the attention economy requires. So that’s a shame.

Chris Masters (Choreographer): He can’t take all the credit for that one—while he’s always been thoughtful about craft and intention, it’s my task-based approach to generating material that he’s adopted that can really lengthen the creative process, from my concert dance work and its movement and music to my direction of Sven’s upcoming album to which this short film is attached (A Feast That Never Comes).

My new live, interdisciplinary and multimedia concert dance work, Mausoleum, for instance, is in the midst of a year-long creative process. Sometimes things take time.

The movie has some beautiful frames that carry the mark of brilliant photography skills. How does photography appeal to you?

Chris: Because I come from the world of live performance, ephemerality has always been a core component of my work. The draw of capturing bodies in movement on film is the ability to establish permanence in a very interesting way when approaching material that is interrogative rather than declarative—dance’s power to emote without being axiomatic and the way in which disparate audiences view the filmed and therefore permanently static work (or the same audience can view it differently depending on the vicissitudes of everyday life) can create a truly inclusive way for diverse audiences to be reached and affected by the work.

Sven: I’m drawn to capturing things on film due to the ability of the filmmaker to control the way in which an event is witnessed. Of course, we encourage audiences to draw their own conclusions regarding the content of the work, but properly framing the way in which different actions or moments are seen on screen is a terribly interesting phenomenon—we only show you what we want you to see, and yet everyone can walk away with radically different (and entirely valid) interpretations of the film.

According to both of you, what feature of a story attracts its viewers the most?

Sven: A big draw for me is a story that seamlessly weaves together the mundane and the profound. I like to carve out avenues of empathy to invite audiences to find an entry point that works for them—that may be the recursive and cyclical nature of abuse that exists in the film, or it may be as simple as the way a character takes a sip of whiskey, or glances over their shoulder.

Chris: And to piggyback on that, the avenues of empathy that we create—and that I’ve long prioritized in my approach to choreography—allow audiences of all type to find their own way into and through the work. Sven’s grandmother doesn’t know what it’s like to do a triple pirouette, but she can identify with or relate to the act of reaching for something that’s just out of your grasp. It’s a way in which we can use movement to elude the often-correct critique of dance as being elitist—we increase access for audiences while providing points of entry that allow them to see themselves in the work.

What kind of stories do you wish to tell? What is your motivation as a storyteller?

Chris: Well I might’ve just accidentally answered that. I want to tell stories that are created by people with diverse backgrounds and viewpoints, so that the final product allows similarly diverse and disparate audiences to find a way to meaningfully connect with the work.

Sven: That’s all dead-on for me, as well. I suppose I’ll just add that a big piece of the structuring of the stories I seek to tell is that they always come from a singular precipice—as I interrogate whatever the topic ends up being, from my own feelings and perspectives to the broader societal and cultural impacts of the topic (in the case of A Feast That Never Comes, technology’s effects on our understanding of self and others, communication, mental health, digital outrage, public vs. private presentation, and cycles of abuse), I let a story emerge authentically, which generally allows the audience to find their own way to trouble the content that I’m grappling with myself.

The pandemic has reshaped our lives. How do you think it has affected filmmaking?

Sven: As this is my first proper film project, I think the only answer I can give is that for some of us, it became a necessary way to create work. With the suspension of live music—a field about which I’ve never been particularly passionate, as a performer, anyway—there had to be another way to tell a story with a visual component. And film provided that outlet for me; without the pandemic, I don’t think that I personally would have seen film as a viable way for me to tell the stories I want to tell.

Chris: Similarly, live dance got horribly interrupted. Not to engage in the Woe-Is-Me Olympics, but Sven performs live music mostly as a solo act, which could be practiced in more-or-less a silo. But as a director of a dance company, once it was possible to safely gather, I still found myself ages away from being able to present new work, due to the length of the generative process and its reliance on having paid collaborators in the same space at the same time for an extended period of time to build new work. Film’s ability to capture and share movement in a way that is entirely inconsistent with the history of live dance has always been interesting to me, but the pandemic made it much easier to envision a future where I split my choreographic efforts between the stage and the screen.

How did you both come up with the story?

Chris: I gave Sven an incredible amount of tasks to reckon with the precipice of the work, and—with the exception of routine check-ins and feedback sessions—he came back with this. Best to hear him tell it.

Sven: Well, first things first, all the disclaimers in the world that the work was created to intentionally craft a “story” that would be endlessly interpretable, with no wrong answers. The repeating lyrical, musical, and visual motifs that recur throughout the album and film can give some hints to my intent, but at the end of the day, impact over intent, and I’m not terribly concerned as a creator or a consumer with authorial intent. So the story is yours to discover—this is especially true in the context of the full album, as most of the songs do not name a character. The film assigns some of these songs to specific characters that exist within the story, but for songs that aren’t visually represented, the listener is afforded the opportunity to—if they want to dive deeply—piece together a narrative that clarifies who is singing to whom in each of the songs, and why they would be saying what they’re saying based on events that aren’t explicitly defined in the lyrics themselves.

To give an example about the tasks given by Chris, for the title track, the lyrics were constructed using two tasks, one for the verses and one for the chorus. The verses were created by performing an erasure of a scholarly article about the phenomenon of digital hoarding—the open tabs of articles you’ll never read, the screenshots of memes you’ll never revisit, the accumulation of documentation of your relationships that can in no way represent even a fraction of the complexity of human connection—which was then rearranged into the lyrics, changing only tenses or pronouns, with no opportunity to invent clever rhymes or phrases (without these tasks, I tend to be too clever by half in my songwriting).

The chorus’s lyrics, on the other hand, were created from an erasure of my own freewrites that I did in response to taking my favorite and my least favorite picture of myself and filtering it through the same Instagram filter over and over, until it was haunted by overwhelming digital artifacts that in turn obscured and highlighted elements of the original image. The rearranging of this erasure then followed the same rules as the verses’ construction.

All of which is to say: I’m not sure I came up with a story. I think you did. And that’s the beauty of it.

Tell us something about the filmmaking process. Was it a smooth run? Or you had to face troubles?

Chris: Going from a choreographic process that generally takes between 3 and 12 months to creating site-specific dance that was frequently generated as the next shot was being set up was an incredible challenge. The performers met the task with incredible dedication, speed, and flexibility, but there were certainly a couple days on set where I was getting frustrated by the inability to craft specificity in the way I generally do over longer generative processes.

Sven: That challenge was certainly top-of-mind for me, and I should mention that while we knew we had something special while we were shooting, it was really the editing process—picking that glance, this wall-slam, the other caressing touch—where I saw the value of filming dance. The specificity comes out of those choices, whereas live performance lacks that level of control.

As for my own experience, the other challenge was that we were staying on location, so we would frequently be set-dressing a bedroom for a scene as soon as the crew member sleeping there woke up. And then of course there’s the budget, but I don’t think it’s particularly novel or unique to have budget woes on any film project, let alone a self-funded one.

How did you come up with the film’s title?

Sven: Well this one’s easy, because I basically already answered it. The phrase “a feast that never comes” was part of the erasure of the scholarly article about digital hoarding. Stripping it of that context is exactly why I love how erasures can open up something that—to me—has a specific origin and meaning, positioning it intentionally to create myriad meanings to the audience.

The content of the film is heavy. It must be extremely exhausting at times, and they affect our mental health. How did you manage such situations?

Chris: A key thing here is simply treating collaborators with respect and sensitivity. Nobody came in thinking we’d be making a light-hearted romp, which is certainly one important way in which creators can ensure a healthy environment in which dark themes can be explored without fear, judgment, or unexpected exposure to potentially-traumatic content.

Sven: I love that this is the last question, because—intentionally or not—it really ties everything together. At the end of the 8-day shoot, we had a fun little wrap party in which we were all processing what had just happened. And let me tell ya, not a single person who was on set had the same read on what the narrative was. They may have had to get pushed into a wall or made fake blood leak from their mouths, but their exposure to the heaviness was filtered through the same experience we want for the audience—the sense and reality that the work depends entirely on your engagement. A Feast That Never Comes is fundamentally unfinished without you.