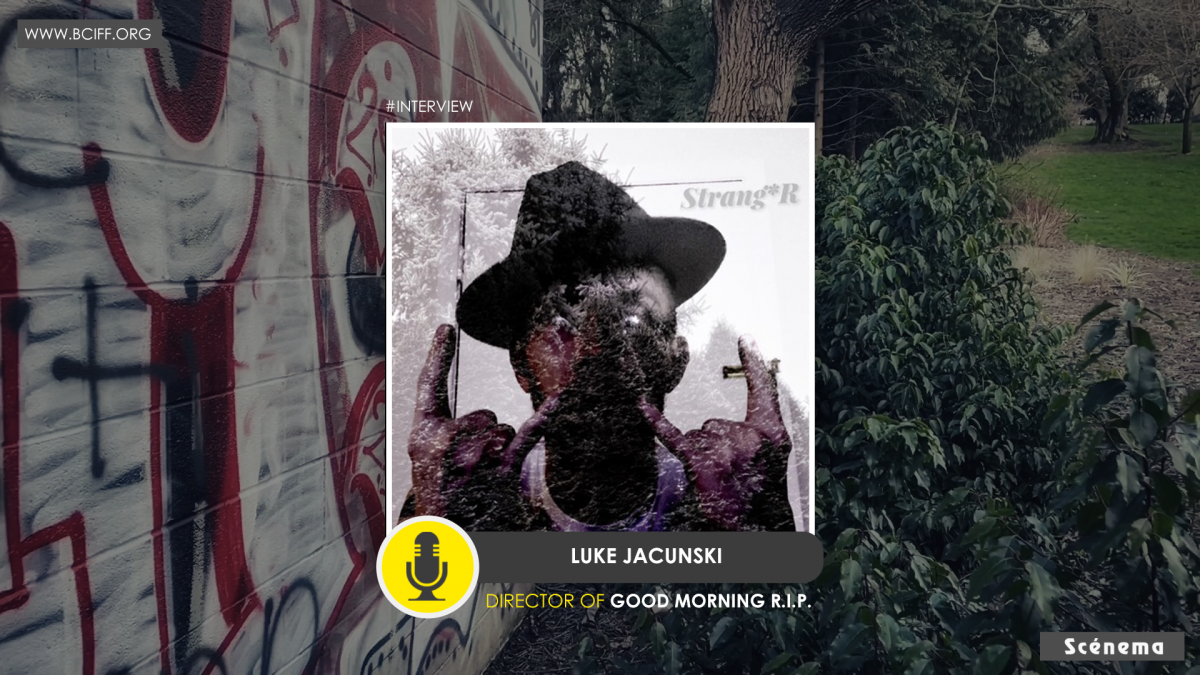 Luke Jacunski is predominantly a photographer.

A relatively new Writer and Director of film, with roots in photography, music production and post production, he wishes to explore and develop a fresh artistic approach.

He has produced his first 4 shorts in under 15 months and now he wishes to introspect what he has learned from this process, as well as reviewing and refining his other scripts and feature length projects. He wishes to continue the development of his debut series Good Morning R.I.P.

Hello Luke, welcome! Good Morning R.I.P is so brilliant. But the name creates a sense of oxymoron. Since Good Morning means a new, fresh beginning and R.I.P stands for the ultimate end of human lives. It’d be great if you could share how you came up with the name!

Hello! Cheers and thank you for saying so!

I chose the name because one can go many different directions with the interpretation. It could be as simple as life and death or a variety of concepts that intertwine. There are cycles of life and death which occur all around us on a daily basis. Maybe it promotes living before you die?…or refers to treading the line between alternate realities? I like that it doesn’t feel boxed in.

Luke, what is your view on the human psyche?

In the film we meet Sky who is struggling so miserably. He is no doubt a very complex character. How did you plan his character graph? How excruciating was it to write such a character?

Oh man, the human psyche can be a fun & twisted rabbit hole to go down. There are many layers to it. It’s closely related to or akin to one’s “spirit” in my opinion. So with a fictional character in a thriller series, the more complex the better. It helps keep the audience guessing.

Sky’s mental battles, although extreme are somewhat normal in my opinion. Most of us have considered or pondered the depths of our own evil. Some may brush those thoughts aside, but Sky chooses to delve within and seek the truth….even if it hurts.

I wouldn’t say it’s excruciating to write Sky’s character. Quite the opposite actually. It feels cathartic. It’s thrilling when the ideas and/or visions flow. As far as the arc or graph is concerned…I know where I want to take the character, but the journey there isn’t strictly defined. I’m trying remain flexible as to what happens next for now.

Sky is so troubled and eventually he tries to reach out to a psychiatrist. Luke, how important is it to have an additional guide?

It’s a step for Sky’s character, but does it lead him in the right direction?

Sky is open minded, but desperate. Not the best combination. One must choose their therapist and form of therapy carefully. Only time will tell if Dr. William Wilson and his methods are beneficial.

If your question is referring to life as we know it and not Sky’s character….then I’d say, it “can be” very valuable to have an additional guide. Whether it’s a mentor, a therapist or simply someone you hold in high regard, it’s healthy to be open to alternate perspectives. It’s just food for thought. In the end you choose whether or not the advice or perspective is of value to you.

Also, you have written Sky, you have directed the movie, and you have played Sky as well! Which part did you enjoy the most with Sky? Was he relatable?

Haha, good question. Tough one too! I enjoy catching ideas, so in that sense I dig the writing process. I have a lively imagination though, so I marinate on each idea until I determine if it makes sense for Sky’s character and the development of the series.

Acting out Sky’s character has been a blast. I haven’t felt any pressure or difficulties in performing his emotional arc thus far. His character is relatable in certain regards and I’ve enjoyed treading the line of good and evil.

Directing is my favorite though. For me, directing what you’ve written is on a different frequency. It’s an intense feeling when you’re on set, like magic in the air.

As a director one has certain requirements, but that changes when one acts. How did you balance your director-actor dynamics?

There’s a lot of decision making and problem solving to address when wearing the director hat, so it can be challenging to switch your brain over to acting mode in a matter of seconds. Over all though, playing both roles simplified things for me and helped in bonding with the cast and crew. Everyone can see I’m willing to get “down and dirty” and have come to the table prepared.

As a Director I am confident in my vision, but always open to thoughts and suggestions. As an Actor, I’m all about whatever it takes….I don’t care if it’s wicked cold out and my nipples are chaffing from rubbing up against my fake bloody shirt for the past few hours. I don’t have stunt men or doubles, so for the final scene of episode 4 I literally fell on my face over and over until I got it right. Woke up with a sore neck and everything. All good though! Definitely worth it, lol.

How do you wish to excel in future? What is your goal in terms of storytelling?

I plan to continue developing Good Morning R.I.P. and write and direct a few feature length films. I’m into thrillers and also a big fan of dark comedies. So I’ll most likely pursue projects along those lines, but I’m open to anything honestly….both as a Director and Actor.

Luke the director or Luke the actor? Whom would you put first?

I took on Sky’s role because I thought it would make life easier for me as a first-time indie filmmaker. The main character would always be available, on time and know the lines. I could shoot certain scenes by myself if and when necessary. Plus, it implies a certain level of confidence to prospective talent and crew when I’m willing to put myself front and center. Kind of like “putting your money where your mouth is”. It’s not a narcissist or control freak thing.

More than anything, I’m trying to push myself as an artist. So whether it is one of my own projects or someone else’s, I’m very open to collaborating or playing a role in a unique cinematic vision!

You have started as a photographer. How does photography enhance your cinematic vision?

Honestly, I think of myself as an artist more than a “photographer”. As an artist and filmmaker, it sharpens my vision to capture moments and images. Photographs often feel like mini silent movies to me and at times connects with my intuition in a way that forces me to pause and reflect as to why I’m being drawn in….is it the framing?, the perspective?, the mood?, etc. etc. Once I identify or connect with what has drawn me in, I take stock of that in my memory. So when I’m brainstorming and delving into a particular mood or feeling for a story, I’ll often refer to photographs to enhance the development process.

Do you have a plan to continue the Good Morning R.I.P series?

I would like to. I’ve already shot a portion of the next episode and know where I want to take the series in general. So yes, that is the plan.

Luke, what is your next project? It would be great to know how you’re going with that!

I have a few feature scripts in development. Mostly in the thriller vain. I haven’t narrowed it down to “what’s next” just yet. Honestly, I’d like to find another writer to collaborate with, as well as a DP. As of now, I’m mostly a one-man show (aside from the actors I cast and whoever helps run the camera when I don’t, lol).  So if anyone out there wants to collaborate, DM me (@strang_r) on Instagram!

Thanks Luke for talking to us!

Thank you! Humbled and honored to discuss my passion for film with you!