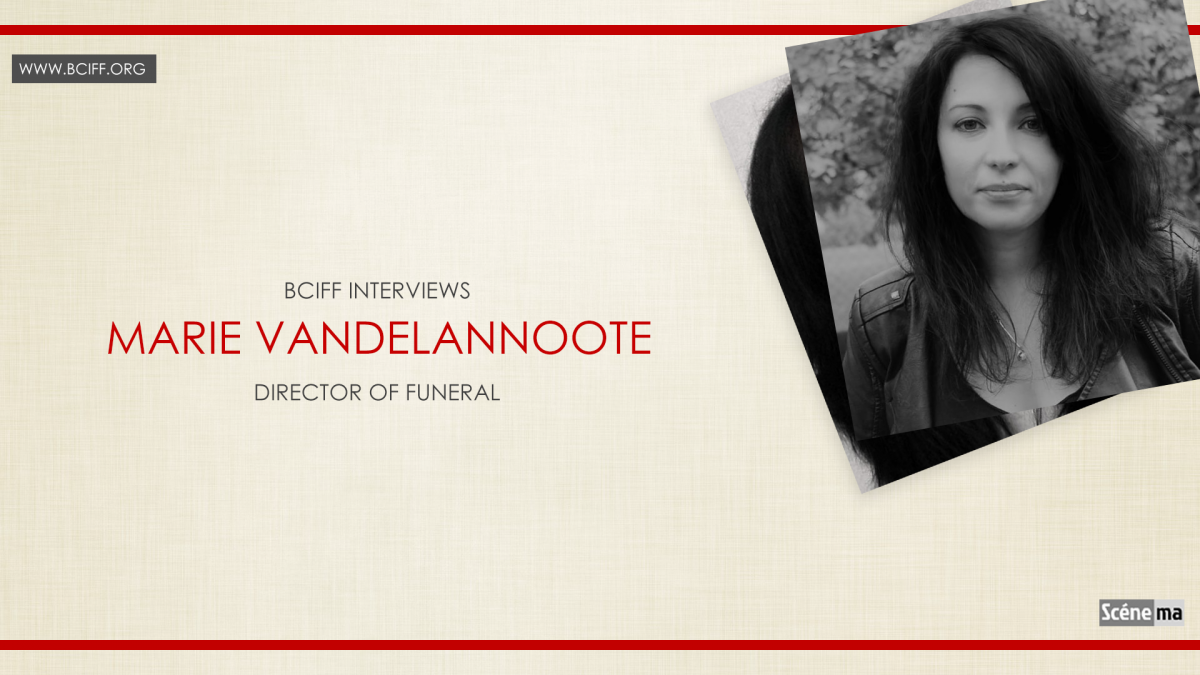 Born on May 21, 1978 in Le Mans, France, Marie Vandelannoote has been doing many things since she came into the world of writing. She has been a director, screenwriter, producer, editor and even a radio host. In fact, Marie began her career in a radio station in 1996 in Lyon. Marie’s been writing for television and video games for 13 years and also regularly writes for literary magazines in France and Quebec.

Marie’s been overtly intrigued in writing horror thrillers. We have that in her Le linceul where she focused in horror. Here, in ‘Funeral’ we have seen a different approach towards death…an approach more serious yet close to heart. In this film, death becomes a confrontation against the fear and the dilemmas one faces throughout their existence.

We have with us the director, writer, producer of this creation…Marie Vandelannoote. It’s an absolute honour to have you with us Marie. My first question to you is…

BCIFF: 13 years in the writing business…tell me, how has it helped in securing a good conversation between the characters? 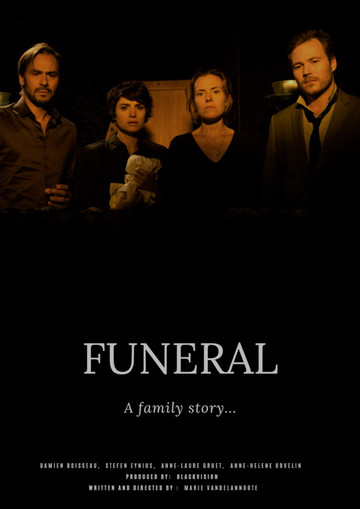 Experience and the consequent number of years spent doing it make it become something extremely natural. It ends up being done instinctively. It’s like a routine, a head gym.

And it’s something I love doing, to create characters, to make them speak, give them life through words, there’s nothing better, as far as I’m concerned.

But I also like to hurt myself and get out of my comfort zone; the film I’m currently producing contains no or almost no dialogue, and so I’m going to try to get all the emotions through the visual, without helping me with dialogue, and that’s a real challenge for me.

BCIFF: The most formal character was to be found on the floor while the alcoholic was on the chair…what was the thought behind this portrayal? Just to maintain the balance of the twist or anything beyond that…?

Julie’s character, brilliantly interpreted by Anne-Hélène Orvelin, is a person who is constantly in control and focused on appearances. And bringing her down in this way and making her lose control of her emotions, making her fall down like that, it was to show that she’s finally as out of control as her brother, but they chose two different ways of expressing it, him through depression and alcohol, and her through extreme control over her person, but in the end, both of them were equally screwed up and that they had much more in common than one might think at first glance. 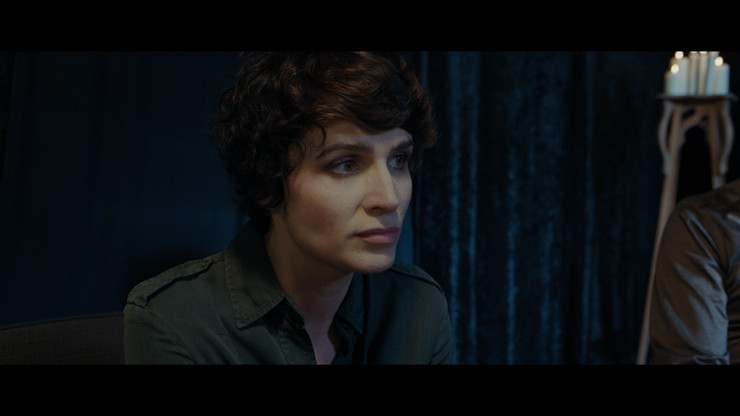 BCIFF: What do you think about the treatment of the film…the starting sequence had a continuous shot for long… was it indeed required?

Yes, I wanted to give this impression of docu-fiction, almost found-footage, which gives the viewer the feeling of being a witness of the scene, of being in the room with them. It was very important for me to film it this way, even if it may surprise at first.

BCIFF: The idea was beautiful and sublime. Where did you come up with such a concept?

That’s a very good question, that I always have a very hard time answering! Honestly, I was listening to a Springsteen song at the time, and the story came together on its own. I had the beginning, the middle, the end… But explaining why it came to my mind, or how, it is always complicated, I admit that I really don’t understand how it works. That just pops in my head. As far as I am concerned, a story is very often caused by an intense emotion that I feel when I read a poem, when I listen to a song, and here, in this case, it was Springsteen.

Maybe I should send him a thank-you card, or something! 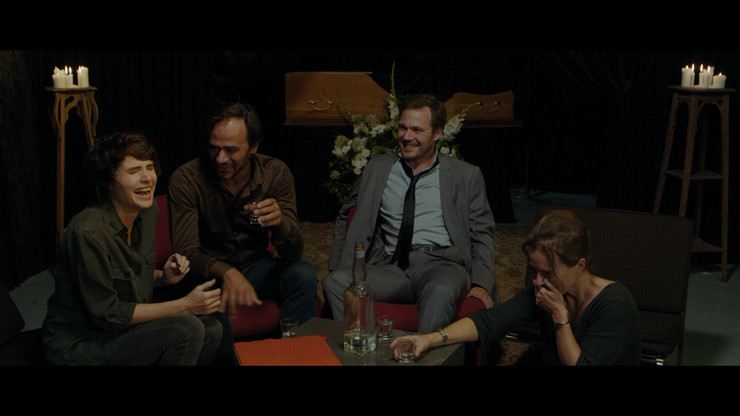 BCIFF: In the beginning of the film, there are lines ‘A man who succeeds to kill himself is far beyond death, because he defied God, by choosing his own hour, and had the last word’…Do you yourself think suicide should be an option?

An option… I don’t know. But it can be tempting, sometimes. But I especially put this quote to describe the state of mind of the person who committed this suicide, trying to explain that finally, he may have sought to regain control of his life, by deciding the moment of his death, as paradoxical as it may seem.

But I don’t want people to think that I’m advocating for suicide either, that’s not the point of the film, but it’s true that right now, there is a lot of talk about assisted suicide, not to mention euthanasia, and I think we can indeed wonder about that. We have no say on the beginning so why can’t we be entitled to decide the ending. From what level of physical or moral suffering, suicide is justified and justifiable. But without getting into philosophical and societal considerations, this is indeed a question that I wanted to talk about through the film. 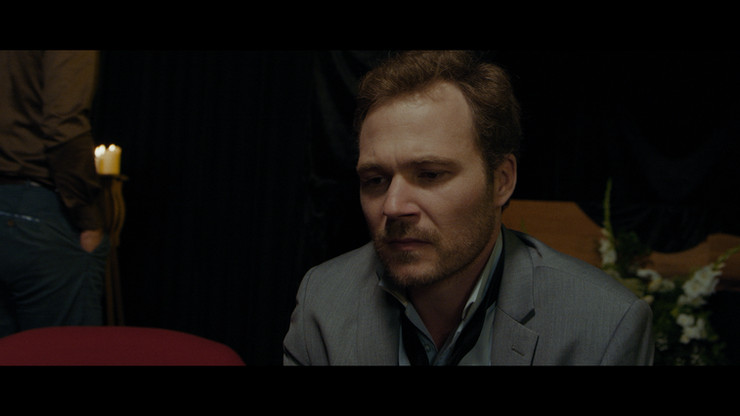 BCIFF: What was your idea behind the categorization of your characters?

The siblings were raised without a mother but with a very authoritarian father who wasn’t leaving much space for personal expression. Everyone had to find their place and they all did it differently. Hence their distance. Their fraternal bond was broken because they all wanted to distance themselves from each other and this family. This deeply shakened the youngest of them who obviously never recovered from this loss of bearings. Their completely opposite characters make it possible to highlight the impact this education had on their respective lives and the tragedies that it could generate, even years later.

BCIFF: With better production do you think this film could’ve been shot at one go?

No, the editing part in the middle is necessary to clearly mark the difference between the family reunion and the final confrontation between all its members.

It’s the calm before the storm, basically. First you start with mistrust, then you have fun, and then you explain. These three well-differentiated parts are necessary for the story structure and it also recalls the different phases of grief acceptance. The mourning of others and sometimes of oneself.

BCIFF: ‘Even Jesus got wasted at Cana’…words from someone who has already defied God. Wouldn’t you want to see this as a touch of an experienced writer?

Well, it’s mostly a humor trait, it always makes me laugh to distort things, specially when it’s too hieratic, and when I think about a Jesus totally smashed at a wedding, you know, starting to turn water into wine and… I don’t know, maybe I watched too many Monthy Python films! But I always find it funny to desecrate religions like that, all of them. After all, if God created man at His image, theoretically, He should have a sense of humor, shouldn’t He!

BCIFF: What was the motivation behind the twist…?

To provoke emotions. That’s the aim of a film, finally, or at least it should be. My job is first and foremost to provoke a desire to laugh, or to cry, or to shout, and not only to make people think about political remarks or societal demands, that are quite honourable themes and which, in my opinion, have their place in a film, But it shouldn’t be at the expense of the story and the emotions. That’s the vision I have of cinema, anyway, and that’s what I wanted to achieve with Funeral.

A critic once said that the film made him want to call the people he loved and tell them how he feels about them. That’s exactly what this is about, and I think it’s the best compliment you can give to Funeral.

To provoke the desire to call people you love and tell them, without waiting, before it’s too late. Especially with your family. This is the main message of the film, and of this final twist.