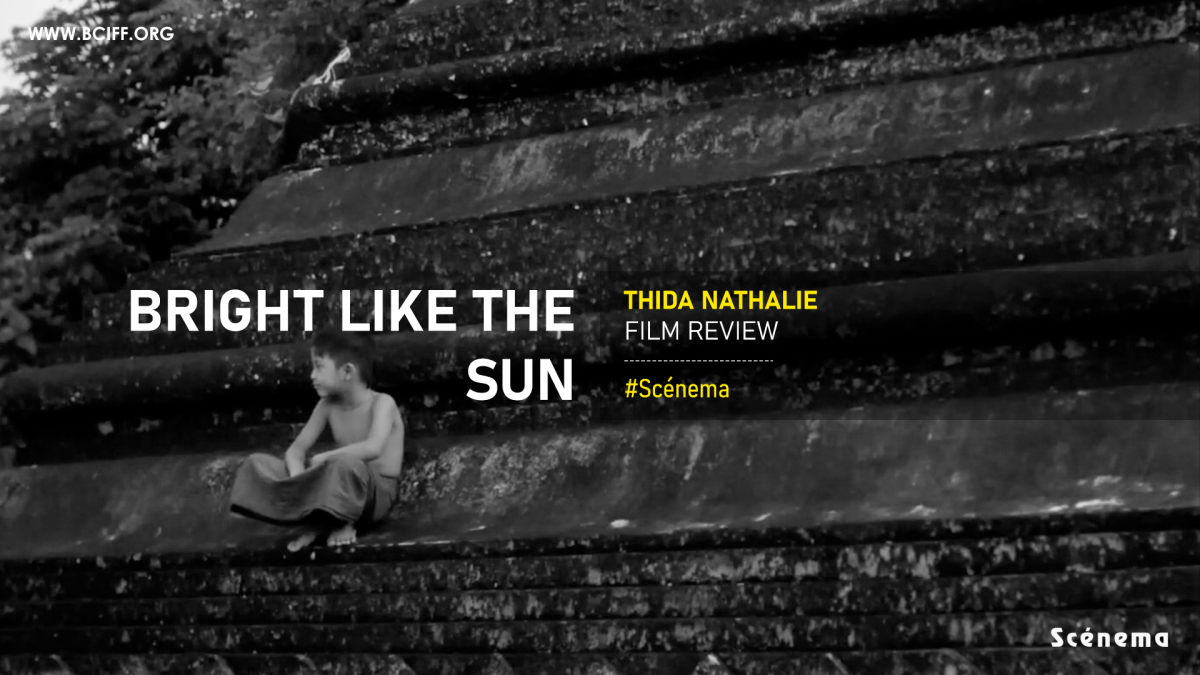 the hatchlings wake in the swaying branches,

in the silver baskets,

and love the world.

Is it necessary to say any more?

Have you heard them singing in the wind, above the final fields?

Have you ever been so happy in your life?”

Bright like the sun chronicles the fascinating life of a boy meandering around the sublime and transcendental realm of eternal mirth. It is the story of  Kaung Myat Htun. He is a hardworking, Burmese boy who comes from a family of tailors. He is intrigued by the ancient golden Pagodas of Mayanmar. He believes they hold precious secrets, with their own stories to tell.

From the outset, it is evident that the boy is special. There is some rare wisdom in him that makes him stand out. He shares his insights about the meaning of existence and death. He reveals that he is enticed by the astral objects. The sky, the sun, the moon and the stars – all trigger his curiosity. He has answers to questions that really elude the psyche of a normal human being.

The storytelling itself is magical. A kind of magic which is beyond trickery or deception. A magic that is alluring and fills one with a feeling of glee. The feeling is enchanting. We are hypnotically transferred to the world away from the cacophony of the one we inhabit. A world which exists beyond the boundary of life and death, where mountains echo their candid wishes in the curious ears of the ocean, where gleeful leaves rustle around the frenzy of life.

The insights provided by the ingenious eyes of the little boy travel layers beyond the imagination of a general person. He confesses that life is not all sunshine and rainbow. He believes it is difficult and full of hardships. Yet one must still keep on looking for the silver lining. He believes that  inevitably exists outside every dark tunnel. The tunnels of war, futility and despair.

The clairvoyance of the boy appears to be born out of pain and suffering. Some how, the young boy appears to have outlived suffering and the preponderant fear of death. The innocuous eyes of the boy do not display inexperience. On the contrary the eyes talk about an excess of memories. Memories that he has outlived, which nonetheless are evidently abhorrent.

The reality meets the transcendent in Yangon through the eyes of a young boy. They come together in a strange and synchronic way. The mundane steps taken on the ground take sublime leaps through the visual narration of the boy.

The enchanting strides of the boy takes us for a journey of wisdom. The various confessions are lessons in philosophy. They are also candid bits about life, suffering and his way of overcoming them.

The director does an impeccable job of creating a world of stunning and captivating visuals. The entire story is told in an adroit fashion with so much left to be meditated upon and contemplate about life by the end of it. The colours, the narration, the scenes – the coming together creates an honest and profound meditation about life, an enquiry about the true meaning of existence and being one with the world around us.

An enticing voice can be heard in the background. A calling into the real beyond the real. A world beyond the stupor (Maya) plaguing life.

The boy claiming that he could fly before being born brings out the true essence of the narrative. He sees something of greater significance in the mundane. Something that can’t be seen through the naked eye.

His desire to become one with the stars indicate a kind of liberation that can be found by defying and defeating the mental stupor (Maya) around the existence in an indifferent and ruthless world. Beyond all physical impediments, like the narrator believes, one must eternally shine bright like the sun!